In 2002, our credit union underwent a major change in our field membership. In order to grow and thrive in the future, we converted from a federal charter, to a state charter, and eventually we obtained a community charter. In an era of financial institution’s mergers, Canals & Trails Credit Union is committed to remaining an independent financial institution that provides high quality service to our members.

Our mission is to provide ultimate member satisfaction, and we believe in the philosophy of “People Helping People.” Call us or stop by today to join our credit union! 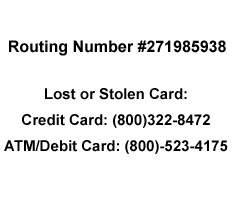